„We're fascinated by the words--but where we meet is in the silence behind them.“

American contemporary spiritual teacher and the author of t… 1931 - 2019

„Behind the word is silence, behind that silence is forgetfulness.“

„Where shall the word be found, where will the word
Resound? Not here, there is not enough silence“

Ash-Wednesday (1930)Context: If the lost word is lost, if the spent word is spent
If the unheard, unspoken
Word is unspoken, unheard;
Still is the unspoken word, the Word unheard,
The Word without a word, the Word within
The world and for the world;
And the light shone in darkness and
Against the Word the unstilled world still whirled
About the centre of the silent Word. O my people, what have I done unto thee. Where shall the word be found, where will the word
Resound? Not here, there is not enough silence

„Where the storyteller is loyal, eternally and unswervingly loyal to the story, there, in the end, silence will speak. Where the story has been betrayed, silence is but emptiness. But we, the faithful, when we have spoken our last word, will hear the voice of silence.“

"The Blank Page"Last Tales (1957)Context: Why, you are to become a story teller, and I shall give you the reasons! Hear then: Where the storyteller is loyal, eternally and unswervingly loyal to the story, there, in the end, silence will speak. Where the story has been betrayed, silence is but emptiness. But we, the faithful, when we have spoken our last word, will hear the voice of silence. Whether a small snotty lass understands it or not.

„A word into the silence thrown always finds its echo somewhere where silence opens hidden lexicons.“

„Behind your image, below your words, above your thoughts, the silence of another world waits.“

„God far exceeds all words that we can here express
In silence He is heard, in silence worshiped best“

„Silence is closer
We're passing ships in the night.“ 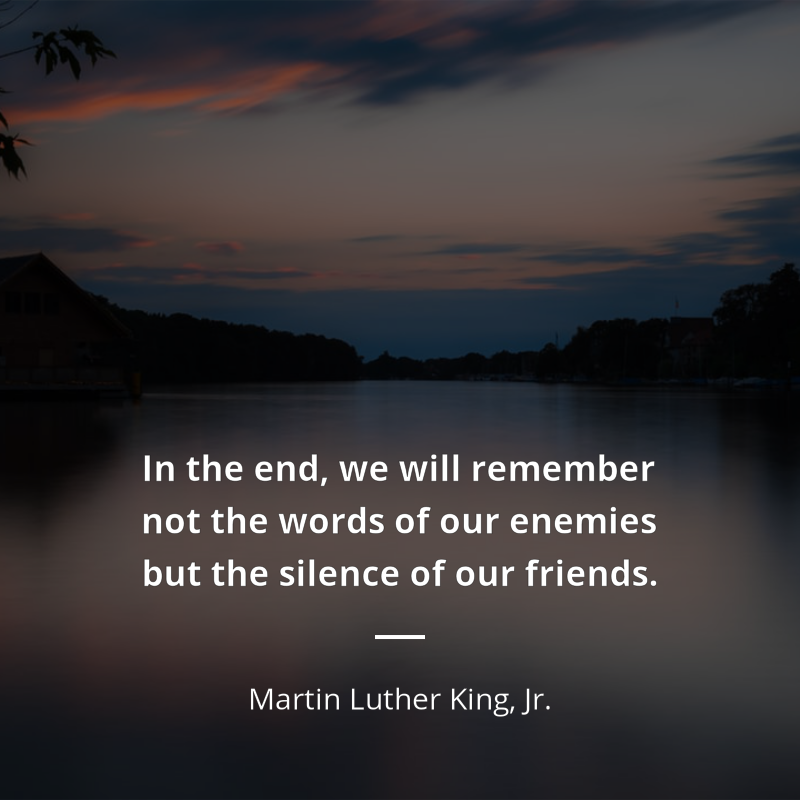 „In the end, we will remember not the words of our enemies but the silence of our friends.“

1960s, The Trumpet of Conscience (1967)Variant: In the end, we will remember not the words of our enemies, but the silence of our friends.

„What was the U.S. reaction to the meeting in Geneva? The U.S. boycotted the meeting… and that has the usual consequence, it means the meeting is null and void, silence in the media.“

Talk titled "On West Asia" at UC Berkeley, March 21, 2002 http://www.chomsky.info/talks/20020321.htm.Quotes 2000s, 2002Context: [Israel's military occupation is] in gross violation of international law and has been from the outset. And that much, at least, is fully recognized, even by the United States, which has overwhelming and, as I said, unilateral responsibility for these crimes. So George Bush No. 1, when he was the U. N. ambassador, back in 1971, he officially reiterated Washington's condemnation of Israel's actions in the occupied territories. He happened to be referring specifically to occupied Jerusalem. In his words, actions in violation of the provisions of international law governing the obligations of an occupying power, namely Israel. He criticized Israel's failure "to acknowledge its obligations under the Fourth Geneva Convention as well as its actions which are contrary to the letter and spirit of this Convention." [... ] However, by that time, late 1971, a divergence was developing, between official policy and practice. The fact of the matter is that by then, by late 1971, the United States was already providing the means to implement the violations that Ambassador Bush deplored. [... ] on December 5th [2001], there had been an important international conference, called in Switzerland, on the 4th Geneva Convention. Switzerland is the state that's responsible for monitoring and controlling the implementation of them. The European Union all attended, even Britain, which is virtually a U. S. attack dog these days. They attended. A hundred and fourteen countries all together, the parties to the Geneva Convention. They had an official declaration, which condemned the settlements in the occupied territories as illegal, urged Israel to end its breaches of the Geneva Convention, some "grave breaches," including willful killing, torture, unlawful deportation, unlawful depriving of the rights of fair and regular trial, extensive destruction and appropriation of property not justified by military necessity and carried out unlawfully and wantonly. Grave breaches of the Geneva Convention, that's a serious term, that means serious war crimes. The United States is one of the high contracting parties to the Geneva Convention, therefore it is obligated, by its domestic law and highest commitments, to prosecute the perpetrators of grave breaches of the conventions. That includes its own leaders. Until the United States prosecutes its own leaders, it is guilty of grave breaches of the Geneva Convention, that means war crimes. And it's worth remembering the context. It is not any old convention. These are the conventions established to criminalize the practices of the Nazis, right after the Second World War. What was the U. S. reaction to the meeting in Geneva? The U. S. boycotted the meeting... and that has the usual consequence, it means the meeting is null and void, silence in the media.

„to fashion silence into words“

From The Poet and the Poem in Songs of the Silent World, Houghton & Grifffin, Boston, USA 1884 kindle ebook ASIN B004TPPDY0

„But silence is not a natural environment for stories. They need words. Without them they grown pale, sicken and die. And then they haunt you.“

„In secret we met
In silence I grieve,
That thy heart could forget,
Thy spirit deceive.
If I should meet thee
After long years,
How should I greet thee?
With silence and tears.“

„Rising from the past, my shadow
Is running in silence to meet me.“

„The fact that we are here and that I speak these words is an attempt to break that silence and bridge some of those differences between us, for it is not difference which immobilizes us, but silence. And there are so many silences to be broken.“

„There is a garden where lilies
And roses are side by side;
And all day between them in silence
The silken butterflies glide.“

„Words are the part of silence that can be spoken.“

„Silence is better than unmeaning words.“

„Silence is more eloquent than words.“

„What difference does it make, whether we keep our silence because [they] force us or because we're afraid they might force us?“