Johann Sebastian Bach was a German composer and musician of the Baroque period. He is known for instrumental compositions such as the Brandenburg Concertos and the Goldberg Variations, and for vocal music such as the St Matthew Passion and the Mass in B minor. Since the 19th-century Bach Revival he has generally been regarded as one of the greatest composers of all time.The Bach family already counted several composers when Johann Sebastian was born as the last child of a city musician in Eisenach. After being orphaned at age 10, he lived for five years with his eldest brother Johann Christoph, after which he continued his musical formation in Lüneburg. From 1703 he was back in Thuringia, working as a musician for Protestant churches in Arnstadt and Mühlhausen and, for longer stretches of time, at courts in Weimar, where he expanded his organ repertory, and Köthen, where he was mostly engaged with chamber music. From 1723 he was employed as Thomaskantor in Leipzig. He composed music for the principal Lutheran churches of the city, and for its university's student ensemble Collegium Musicum. From 1726 he published some of his keyboard and organ music. In Leipzig, as had happened during some of his earlier positions, he had difficult relations with his employer, a situation that was little remedied when he was granted the title of court composer by his sovereign, Augustus, Elector of Saxony and King of Poland, in 1736. In the last decades of his life he reworked and extended many of his earlier compositions. He died of complications after eye surgery in 1750 at the age of 65.

Bach enriched established German styles through his mastery of counterpoint, harmonic and motivic organisation, and his adaptation of rhythms, forms, and textures from abroad, particularly from Italy and France. Bach's compositions include hundreds of cantatas, both sacred and secular. He composed Latin church music, Passions, oratorios, and motets. He often adopted Lutheran hymns, not only in his larger vocal works, but for instance also in his four-part chorales and his sacred songs. He wrote extensively for organ and for other keyboard instruments. He composed concertos, for instance for violin and for harpsichord, and suites, as chamber music as well as for orchestra. Many of his works employ the genres of canon and fugue.

Throughout the 18th century Bach was primarily valued as organist, while his keyboard music, such as The Well-Tempered Clavier, was appreciated for its didactic qualities. The 19th century saw the publication of some major Bach biographies, and by the end of that century all of his known music had been printed. Dissemination of scholarship on the composer continued through periodicals exclusively devoted to him, and other publications such as the Bach-Werke-Verzeichnis and new critical editions of his compositions. His music was further popularised through a multitude of arrangements, including, for instance, the Air on the G String, and of recordings, such as three different box sets with complete performances of the composer's oeuvre marking the 250th anniversary of his death. Wikipedia

„If I decide to be an idiot, then I’ll be an idiot on my own accord.“ 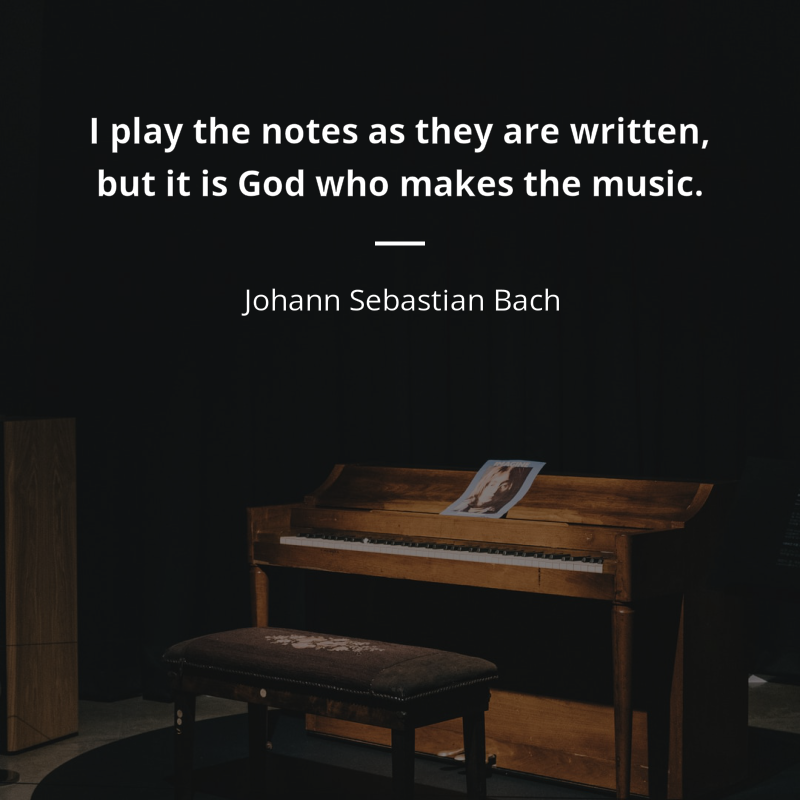 „I play the notes as they are written, but it is God who makes the music.“

„Harmony is next to Godliness“

„Music is an agreeable harmony for the honor of God and the permissible delights of the soul.“

„What I have achieved by industry and practice, anyone else with tolerable natural gift and ability can also achieve.“

„It's easy to play any musical instrument: all you have to do is touch the right key at the right time and the instrument will play itself.“

Variant: There's nothing remarkable about it. All one has to do is hit the right keys at the right time and the instrument plays itself.

„The aim and final end of all music should be none other than the glory of God and the refreshment of the soul.“

Variant: The final aim and reason of all music is nothing other than the glorification of God and the refreshment of the spirit.

„All music should have no other end and aim than the glory of God and the soul's refreshment; where this is not remembered there is no real music but only a devilish hubbub.“

Quoted in Ludwig Prautzsch Bibel und Symbol in den Werken Bachs, p. 7 http://books.google.co.uk/books?id=xaG9peANY9kC&pg=PA7&dq=teuflisches+%22Finis+und+Endursache+anders+nicht,+als+nur+zu+Gottes+Ehre+%22;translation from Albert Schweitzer (trans. Ernest Newman) J. S. Bach (New York: Dover, 1966), vol. 1, p. 167Variant: Like all music, the figured bass should have no other end and aim than the glory of God and the recreation of the soul; where this is not kept in mind there is no true music, but only an infernal clamour and ranting.

„To the glory of the most high God alone, and that my neighbour may be educated thereby.“

„Where there is devotional music, God with his grace is always present.“