Jane Austen was an English novelist known primarily for her six major novels, which interpret, critique and comment upon the British landed gentry at the end of the 18th century. Austen's plots often explore the dependence of women on marriage in the pursuit of favourable social standing and economic security. Her works critique the novels of sensibility of the second half of the 18th century and are part of the transition to 19th-century literary realism.

With the publications of Sense and Sensibility , Pride and Prejudice , Mansfield Park and Emma , she achieved success as a published writer. She wrote two additional novels, Northanger Abbey and Persuasion, both published posthumously in 1818, and began another, eventually titled Sanditon, but died before its completion. Her novels have rarely been out of print, although they were published anonymously and brought her little fame during her lifetime.

A significant transition in her posthumous reputation occurred in 1833, when her novels were republished in Richard Bentley's Standard Novels series, illustrated by Ferdinand Pickering, and sold as a set. They gradually gained wider acclaim and popular readership. In 1869, fifty-two years after her death, her nephew's publication of A Memoir of Jane Austen introduced a compelling version of her writing career and supposedly uneventful life to an eager audience.

Austen has inspired a large number of critical essays and literary anthologies. Her novels have inspired many films, from 1940's Pride and Prejudice to more recent productions like Sense and Sensibility and Love & Friendship .

Jane Austen's use of biting irony, along with her realism and social commentary, have earned her great and historical importance to critics and scholars.

„I declare after all there is no enjoyment like reading! How much sooner one tires of any thing than of a book! -- When I have a house of my own, I shall be miserable if I have not an excellent library.“

„A lady's imagination is very rapid; it jumps from admiration to love, from love to matrimony in a moment.“

„I could easily forgive his pride, if he had not mortified mine.“

„There is nothing I would not do for those who are really my friends. I have no notion of loving people by halves, it is not my nature.“

„It isn't what we say or think that defines us, but what we do.“

Variant: It is not what we think or feel that makes us who we are. It is what we do. Or fail to do...Source: Sense and Sensibility

„We are all fools in love“

„For what do we live, but to make sport for our neighbors and laugh at them in our turn?“

„You pierce my soul. I am half agony, half hope… I have loved none but you.“

Variant: You pierce my soul. I am half agony, half hope. Tell me not that I am too late, that such precious feelings are gone for ever.Source: Persuasion 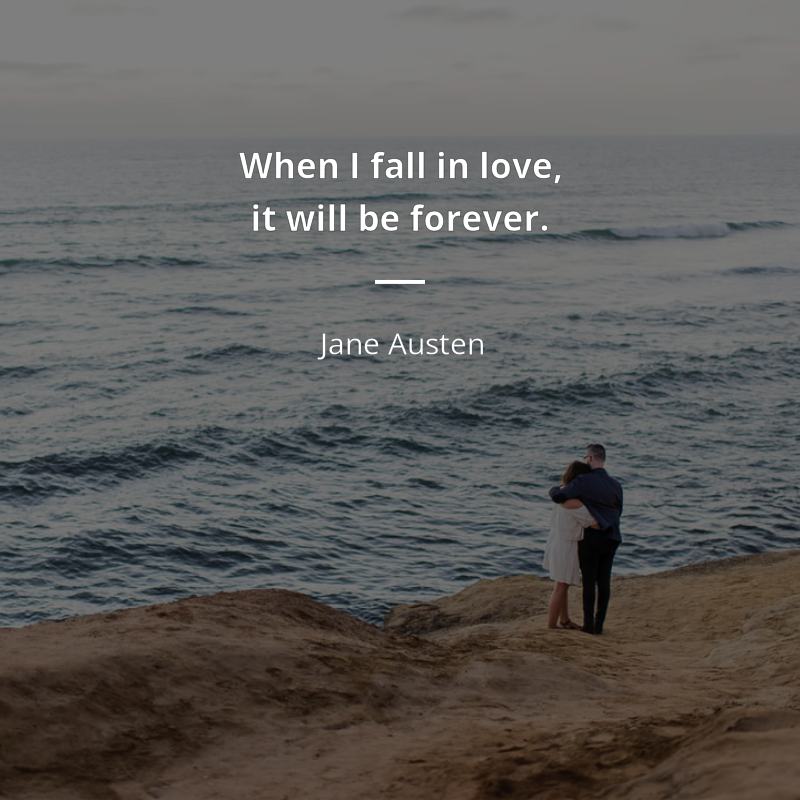 „When I fall in love, it will be forever.“

Source: Sense and Sensibility: The Screenplay

„The more I know of the world, the more I am convinced that I shall never see a man whom I can really love. I require so much!“

Variant: Mama, the more I know of the world, the more I am convinced that I shall never see a man whom I can really love.Source: Sense and Sensibility

„I am the happiest creature in the world. Perhaps other people have said so before, but not one with such justice. I am happier even than Jane; she only smiles, I laugh.“

„I do not want people to be very agreeable, as it saves me the trouble of liking them a great deal.“

„Vanity working on a weak head produces every sort of mischief.“

„If I loved you less, I might be able to talk about it more.“

„Till this moment I never knew myself.“

„From the very beginning— from the first moment, I may almost say— of my acquaintance with you, your manners, impressing me with the fullest belief of your arrogance, your conceit, and your selfish disdain of the feelings of others, were such as to form the groundwork of disapprobation on which succeeding events have built so immovable a dislike; and I had not known you a month before I felt that you were the last man in the world whom I could ever be prevailed on to marry.“

„Angry people are not always wise.“

„In vain have I struggled. It will not do. My feelings will not be repressed. You must allow me to tell you how ardently I admire and love you.“

Variant: In vain I have struggled. It will not do. My feelings will no longer be repressed. You must allow me to tell you how ardently I admire and love you.Source: Pride And Prejudice

„It is a truth universally acknowledged that a single man in possession of a good fortune must be in want of a wife.“

Variant: It's a truth universally acknowledged, that a single man in possession of a good fortune, must be in want of a wife.Source: Pride and Prejudice (1813)