Kakashi Hatake is a fictional character in the Naruto manga and anime series created by Masashi Kishimoto. In the story, Kakashi is the teacher of Team 7, consisting of the series' primary characters, Naruto Uzumaki, Sasuke Uchiha, and Sakura Haruno. He is initially portrayed as a detached and apathetic figure, but as the series progresses, his loyalty to his friends and students becomes increasingly apparent. Kakashi's past has been extensively explored in the series, resulting in a gaiden being devoted to his past experiences. Kakashi has appeared in several pieces of Naruto media, the featured films in the series, the original video animations, and the video games.

Kakashi was originally created by Kishimoto to be a harsh teacher but the author decided to avoid that. Instead, he made him more generous to calm his students in difficult situations to the point of giving him feminine traits. Kakashi's design gave Kishimoto difficulties as a result of having most of his face covered and as a result it was difficult to show his emotions. For the anime series, he is voiced by Kazuhiko Inoue in Japanese and Dave Wittenberg in the English dub.

Numerous anime and manga publications have praised and criticized Kakashi's character. Although he has been noted to be an echo of similar detached shōnen manga characters, the duality of Kakashi's apathetic and serious sides have been praised. Kakashi has been highly popular with the Naruto reader base, placing high in several popularity polls. Merchandise based on Kakashi has also been released, including key chains and plush dolls.

„The hole in one's heart gets filled by others around you. Friends won't flock to someone who abandons the memory of his friends and gives up on the world just because things don't go the way he wants them to. That won't help fill the hole in your heart. And people won't help those who run away and do nothing. As long as you don't give up, there will always be salvation.“

„Let it go, you've got to forget about revenge. Believe me, in this work I've met a lot of guys who feel the way you do. Trust me, for those who follow the path of revenge, it never ends well. You'll only tear yourself apart and even if you succeed with your revenge, what would you have then... nothing, emptiness.“ 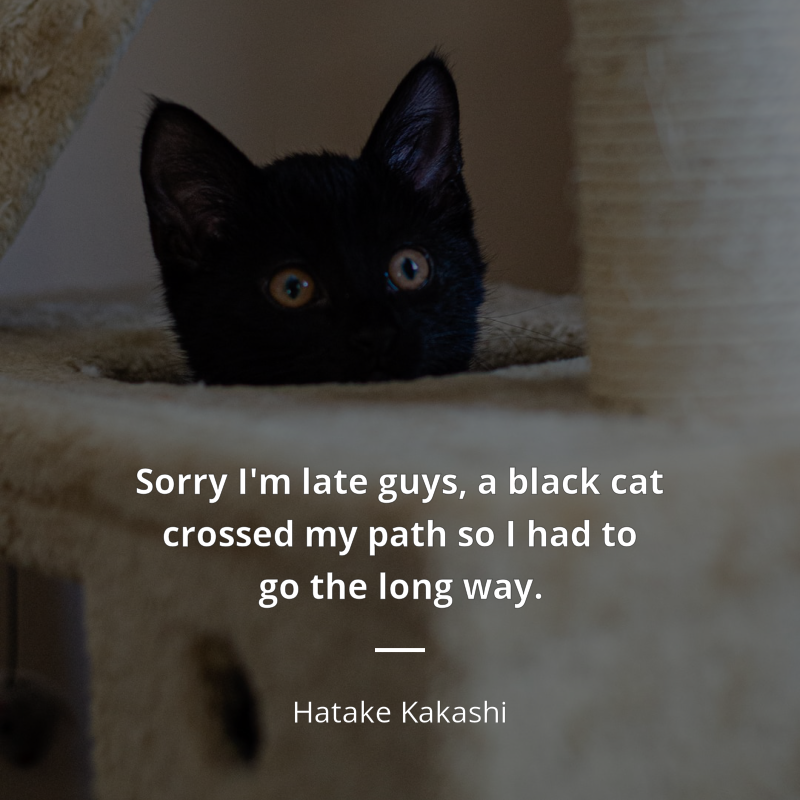 „Sorry I'm late guys, a black cat crossed my path so I had to go the long way.“

English writer and social critic and a Journalist