All that is necessary for the triumph of evil is that good men do nothing.

This is probably the most quoted statement attributed to Burke, and an extraordinary number of variants of it exist, but all without any definite original source. They closely resemble remarks known to have been made by the Utilitarian philosopher John Stuart Mill, in an address at the University of St. Andrew (1 February 1867) http://books.google.com/books?id=DFNAAAAAcAAJ&pg=PA36&dq=%22Bad+men+need+nothing+more+to+compass+their+ends,+than+that+good+men+should+look+on+and+do+nothing%22&hl=en&sa=X&ei=RUh5U6qWBLSysQT0vYGAAw&ved=0CEEQ6AEwBA#v=onepage&q=%22Bad%20men%20need%20nothing%20more%20to%20compass%20their%20ends%2C%20than%20that%20good%20men%20should%20look%20on%20and%20do%20nothing%22&f=false : Bad men need nothing more to compass their ends, than that good men should look on and do nothing. The very extensively used remarks attributed to Burke might be based on a paraphrase of some of his ideas, but he is not known to have ever declared them in so succinct a manner in any of his writings. It has been suggested that they may have been adapted from these lines of Burke's in his Thoughts on the Cause of the Present Discontents http://oll.libertyfund.org/Texts/LFBooks/Burke0061/SelectWorks/HTMLs/0005-01_Pt02_Thoughts.html (1770): "When bad men combine, the good must associate; else they will fall one by one, an unpitied sacrifice in a contemptible struggle." (see above)
:This purported quote bears a resemblance to the narrated theme of Sergei Bondarchuk's Soviet film adaptation of Leo Tolstoy's War and Peace, produced in 1966. In it the narrator declares "All that is necessary for evil to triumph is for good men to do nothing", although since the original is in Russian various translations to English are possible. This purported quote also bears resemblance to a quote widely attributed to Plato, that said "The penalty good men pay for indifference to public affairs is to be ruled by evil men." It also bears resemblance to what Albert Einstein wrote as part of his tribute to Pablo Casals: "The world is in greater peril from those who tolerate or encourage evil than from those who actually commit it."
: More research done on this matter is available at these two links: Burkequote http://www.tartarus.org/~martin/essays/burkequote.html & Burkequote2 http://www.tartarus.org/~martin/essays/burkequote2.html — as the information at these links indicate, there are many variants of this statement, probably because there is no known original by Burke. In addition, an exhaustive examination of this quote has been done at the following link: QuoteInvestigator http://quoteinvestigator.com/2010/12/04/good-men-do/.DisputedVáltozat: The only thing necessary for the triumph of evil is for good men to do nothing 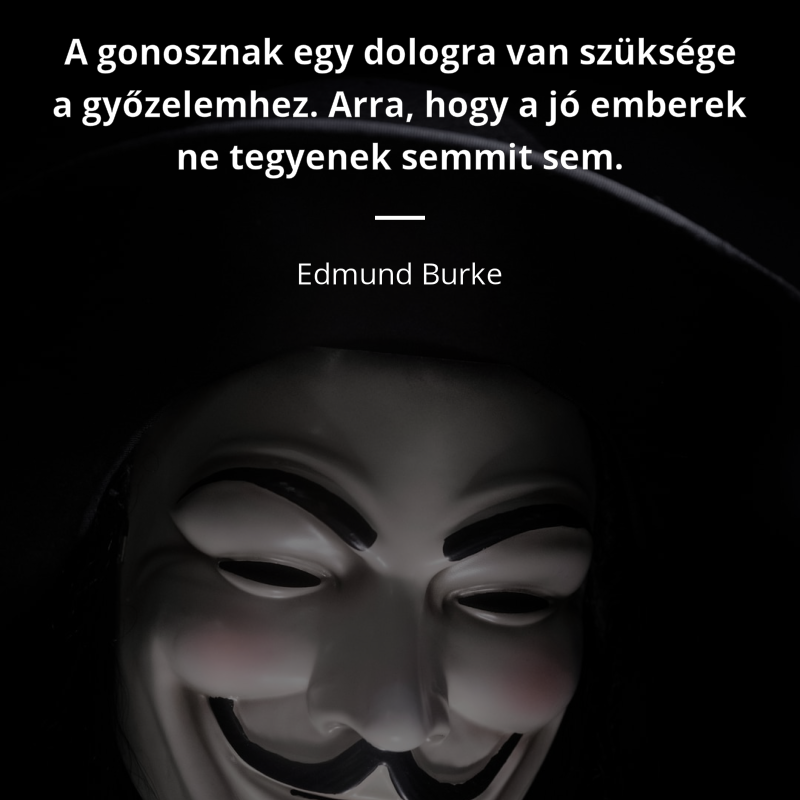 Eredeti: Man's nature is not essentially evil. Brute nature has been known to yield to the influence of love. You must never despair of human nature.